As tornado season is rapidly approaching I thought I'd add a chase log here or there from the past. Today's is from April 22, 2010 a great chase day in far W Kansas where we bagged 5 tornadoes between Lakin and Shallow Water.

Forecast: A surface low was located in E Colorado with a warm front stretching from SE Colorado into SW Kansas and a dryline extending from SE Colorado into SW KS into the TX Panhandle. Upper 50/low 60 dews were setting up along the dryline with nice SE/E 850mb winds aloft and a moderate 500mb winds out of the SW. This created great directional shear over a large area of the Southern Plains. We were torn between 2 targets 1)E TX Panhandle 2)SE CO/SW KS. Both targets looked good but SW Kansas had winds howling straight out of the east with due east 850s and WSW 500s creating more than a 90 degree turning with height. This allowed helicity values along the warm front to be in the 400-600m2/s2 range and with low 60F dews projected to push as far west as the KS/CO border it was an easy choice for my dad and I. SW Kansas or bust. Not to mention little to no chasers targeting this area so we would have it nearly to ourselves. 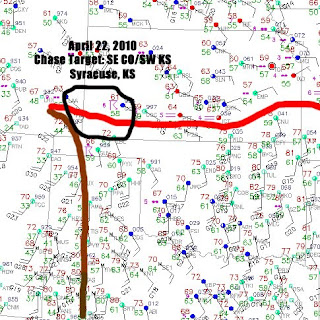 Summary: We spent the nighe before in Wichita not knowing if we would target the TX Panhandle or SW Kansas so if we were in Wichita we would have quicker access to either target. The following morning it was clear SE CO/SW KS was the play more specifically the Holly, CO to Syracuse, KS corridor. We left Wichita after breakfast for Syracuse, KS hoping to arrive by 2-3pm. We were making good time so we stopped in Dodge City for a longer lunch than anticipated and came out only to see an MD was issued for SE CO/SW KS mentioning a tornado watch would be issued. As we approached Garden City I got a call from Michael Carlson who said a storm had already fired near La Junta, CO and had produced 2 tornadoes. We immediately were dissipointed but knew the day was young so we kept on west. Then near Syracuse we got into some quarter sized hail that boosted our spirits followed by an elevated tornado warned storm near Granada, CO. We decided to needed to be further east as more storms fired near Syracuse our original target. After blasting east through a few more storms cores we positioned ourselves south of Lakin where a tornado warned storm was approaching.As it crossed the Arkansas River we could make out this massive EF2 wedge that quickly became rain wrapped shortly after this was taken south of Lakin looking west. 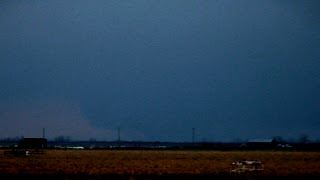 Amazing structure on this storm as we position ourselves NE of the large tornado seen underneath near the center of the image. We are NE of Lakin here. 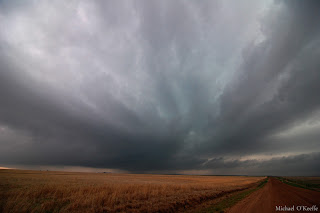 The next tornado was a nice fat cone that we saw quite a distance as the meso occluded to our SW. This was near Deerfield, KS. 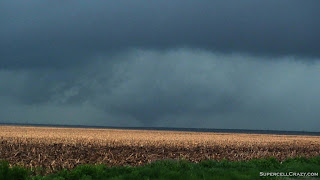 The third tornado of the day was also the most photogenic it was a massive cone that slowly took its time roping out well SW of Friend, KS. 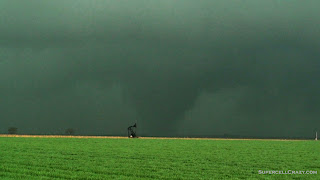 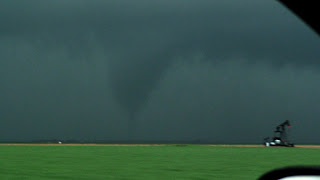 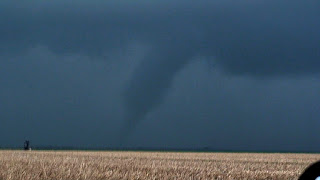 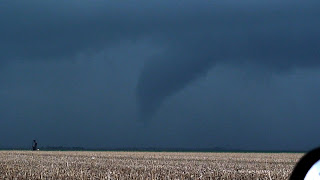 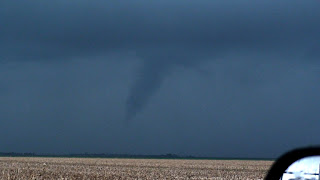 The next tornado developed very quickly and was a large wedge that quickly became rain wrapped near due west of Friend, KS. 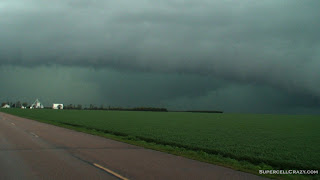 The final tornado of the day was likely a satellite to the fourth tornado and was very brief lasting only seconds. Looking west from a mile north of Shallow Water, KS. 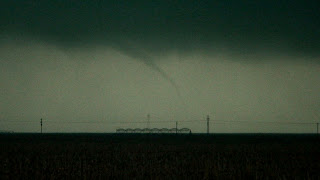 After the final tornado dissipated the storm had become a monster HP that we didn't want to continue chasing so we let the RFD slam us which it did with 60+MPH winds and driving rain and then we drove on south to Garden City for some dinner before driving to McPherson, KS for the night in anticipation of another chase in Nebraska the following day.
Posted by Michael O'Keeffe at 3:19 PM