Posted by Michael O'Keeffe at 4:55 PM No comments:

Below are video stills of yesterday's tornadoes that I intercepted in NW Oklahoma. There is also a video uploading now that I will post shortly. 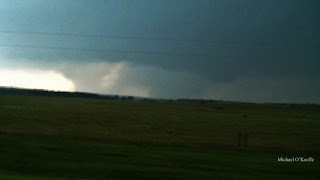 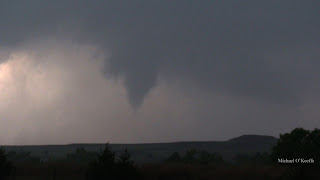 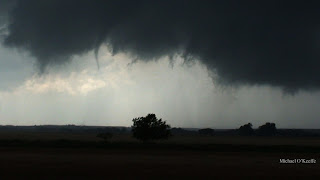 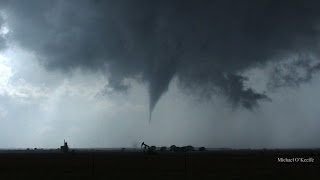 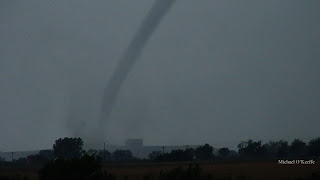 And another photo of the Fairview tornado. Posted by Michael O'Keeffe at 5:03 PM No comments:

I intercepted 4 tornadoes today between Canton,OK and Fairview,OK. The first was a large wedge that unfortunately I showed up a bit late too and only saw the end of it from about 3-4 miles away. I only have video of this tornado. The second tornado was a elephant trunk tornado that lasted only a few minutes. The third was a brief little cone tornado with a small debris cloud and the last tornado was a gorgeous long rope tornado that lasted near 5 minutes just south of Fairview. I then had problems with the Delorme and made a few wrong turns keeping me too far from reaching the OKC action and I didn't feel like driving all the way back down there even though I regret that decision now. I am very happy with my results regardless today minus being late to the Canton beast! Looks like more action this weekend hopefully we can get out because it could be HUGE! Also keep OKC in your thoughts and prayers as many areas hit last year on May 10 and May 3, 1999 have been hit again by violent tornadoes.
Posted by Michael O'Keeffe at 9:09 PM No comments:

A major outbreak of tornadoes appears likely today over SC KS/C OK as a high risk has been issued by the SPC. Long track/violent tornadoes and monster hail will be serious threats with potentially long tracked cyclic supercell thunderstorms. Right now I am liking the KS/OK border region around I35 but they could change as I take a look at later RUC runs and HRRR data.
Posted by Michael O'Keeffe at 6:12 AM No comments:

Tomorrow looks absolutely huge across C KS/C OK as a powerful trough blast into the region. 70f dews with 4000j/kg of CAPE with near perfect large hodographs will provide a very volitle enviornment for monster supercells with gorilla hail and strong tornadoes. I have a good feeling about this one as I will be out tomorrow for sure!
Posted by Michael O'Keeffe at 12:06 PM No comments:

I haven't posted on here in a while because well there hasn't been much to post about. Outside of a major "I saw it coming but went out anyway" bust in SW Kansas I haven't been doing much chasing because there really hasn't been much to chase. Fortunately though that looks to change very soon. This week I am incredibly busy with school and graduation so I can't get out at all this week but my dad will be out on Thursday in W/C Kansas where things look to be shaping up for a big event anywhere from Hill City to Coldwater into Oklahoma. There is a very slight chance I can chase on Friday closer to home in E Kansas but that depends on when the days events get done with. Then on Monday May 23 and Tuesday the 24th both look HUGE over the C/S Plains again and I WILL be chasing these events which I am very much looking forward too. After that the models are back and forth so who knows but it is nice to finally see some classic severe weather setups moving into the Plains.

Posted by Michael O'Keeffe at 3:31 PM No comments: